Good day people, or bad day, whatever. I’m here once again with a review. Not a surprise 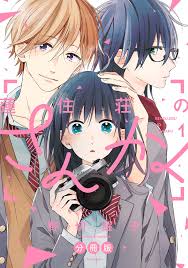 in the least. So school started this last week and while I was on a trip, school continued so I have to do some homework already T_T That aside, I hope I can finish a review every week. I mean, I guess I can always do it in the weekend, since I don’t do a lot in the late evening or the early morning. I think I’ll try to do it jus ton Saturday or Sunday. I’m gonna have a tight schedule with some things aside from school, so let’s see how far I’m gonna get. Anyways, let’s just start.

The author has made quite some shoujo mangas. I haven’t read any of them, but some sound interesting, so I may read some in the future. And that’s it yes. I don’t have a lot of information really.

Mochizuki Mako decided to leave her home and enrolled in a boarding high school known for its photography program. She moves into a boarding house where her childhood friend Kei and her classmate Amemura, who hates having his picture taken, also stay.

First love and dreams, what will this fateful spring bring…?

Well, I quite liked it. It’s short, but I guess nice for a shoujo manga. There’s a classical love-triangle, but it’s quite predictable so it’s not really much of a bother. To be honest, it’s a manga that doesn’t really has a surprise. Still, quite good.

Concept is nice Photography is a hobby that is nice, but not very often used. I think the outlining is pretty good and solid.

The art is just typical sparkly shoujo manga stuff. I like the art style, maybe because I work with chibis and I like cute art. So it’s all good. Liked the panels and the front page colouring.

The story itself. Well, it’s shoujo manga. Really normal issues, not really special, very predictable, but just comfortable to read. Romance is very pure and innocent. Not really much of a comment.

The character development is obvious. Romance and opening the eyes a bit more in youth. That’s it like always.

So in general, it’s a good shoujo manga. Very typical, but at least happy with a blunt protagonist. It sometimes lacks a bit of depth, but it’s a short manga. So I guess I’ll give it a 7/10, since it’s really just your everyday shoujo manga, but it’s nice to read. Give it a try.

And that was it for this week. It wasn’t really special or anything, just a little review. I hope you don’t suffer at school if your school year began either and until a next time.