Well, this will be a fast one this time as I have to learn for a test ^_^”. So apologies, but this is a short one anyways. I only thing I know is that it apparently has a novel too. From what is what adapted, I don’t know, but sure. As I will have to type fast, let’s move on! 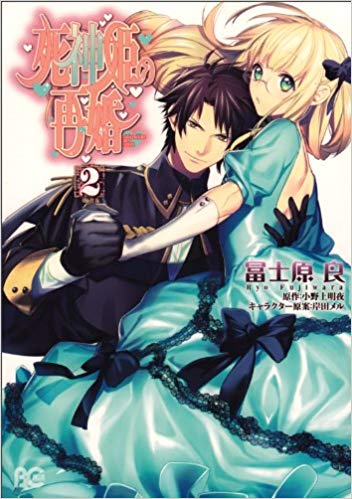 Because at her wedding ceremony her future husband suddenly died, people decided to call Alicia “Shinigamihime” (the princess of the death). Some time after that incident, a despot came to propose to her…

So I quite liked this manga. The story itself is a bit muddled in my head, but I know from the fragments that it’s a witty story. The protagonist is quite amusing and not really a lady. Still, she’s quite pretty I guess. So I liked the concept and the story, even though it’s a really no-brain story. Not that that’s wrong, but I still want to have more stories I have to think. Well, character development wasn’t really there, but I felt it had a story, but the characters don’t need the development actually. The story has an ending, which I don’t remember (lol sorry). I don’t remember it, but I think it’s a closed ending, where gets followed with a sequel since they originally wanted to stop this manga I think. Well, I’m happy they didn’t because all in all, it had a refreshing feeling. It’s an original story and the protagonist is quite like a happy-go-lucky person. Maybe a bit too much luck I guess, but that’s with every protagonist. I’ll give this a 7/10. Although I quite liked it, it’s not like I had the biggest impression of it. It’s nice to read, but that’s it for me.

Well, sorry that this review is short, but I at least wanted to write a review at least, before I get lazy. Now I really have to go as I still have to do some stuff (cry), called home/school work. Anyways, bye