So, I really make this review on the day itself, because I discovered i completely forgot about making a review. I forgot, because I was a bit tense with certain things for school. So sorry if this is a short one, but I at least wanted to make one. so here you go and enjoy, though this time I really had to copy-paste the synopsis. You know, on MAL they say that its source is original, but by adaptations is said it comes from a manga. So, how can you explain that? 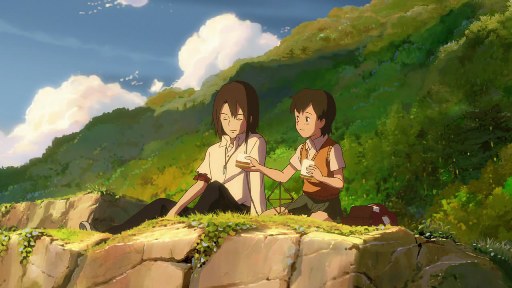 If you could turn all your memories into a song, what would it resemble?

Between being an exceptional student and taking care of the house alone during her mother’s absence, Asuna Watase’s only distraction is listening to her old crystal radio in her secret mountain hideout. One day, she accidentally tunes to a mysterious and melancholic melody, different from anything she has ever heard before. Soon after, an enigmatic boy named Shun saves her from a dangerous creature, unknowingly dragging Asuna on a long journey to a long lost land bound to surpass her very imagination, turning her once melodic life into an intricate requiem.

So wow, this movie was beautifully made.The art, music and story were all beautiful. The concept about coming back to life, I always thought it was very cliché every time I read it, but this was very interesting and uniquely made. It’s a beautiful and in some sense a realistic concept. I wonder how the creator thought about this. I mean, the realism is, because you have to do something for it. Not always is that nice, so what are you choosing and are the dead you revive really the persons you knew? The story, how the adventure went, simply contradicting. It is indeed super beautiful, but so many flags of sub-plots where there and never answered. It left me with many question, such as why did the government do that? But the art made it so that the story seemed beautiful. I think the story wasn’t bad, but let the sub-plots do something too instead of leaving them open. The story development…….was there one with Asuna? yeah I couldn’t find it, but I liked how she was. Though she really didn’t change of character and was more like roaming around in the world. I didn’t really mind it. I didn’t have a great impression on this, but not a small one either due to the art and concept. I wil give this a 7/10, because there are som little mishaps, but it definitely isn’t a bad one. I guess you can call it average, but with a very great surface.

So this was it for this week, I have a few minutes left before going to school!!! Ahhh, okay next time I will remember.