Divine gate eh? I sometimes have the feeling it’s underrated. Though I can understand why people can think not good about it. It’s been a long time since I saw this anime. I’m not going to re watch it again so I have to rely on memory of only opinion to get this through. So let’s go! 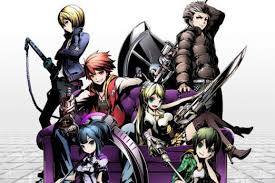 The legend of the Divine Gate is a story told to young children that depicts the merging of the living world, the heavens, and the underworld. “Adapters”—people born with unique elemental abilities gifted to them from the union of these worlds—formed the World Council, an organization which controls the chaos of the Gate by portraying its legend as nothing more than a myth. These Adapters train in a special academy owned by the World Council that allows the students to hone their skills.

Aoto, a teenage boy with exceptional water powers and a tragic past, rejects the offer to join the academy numerous times—until he is successfully pressured by the energetic wind user Midori and stubborn fire user Akane. Together, with the World Council and their mysterious leader Arthur, they seek out the Gate in the hopes of uncovering the truth. But in order to reach their goals, they must unite and overcome their own despair while dealing with behind the scene mischief. 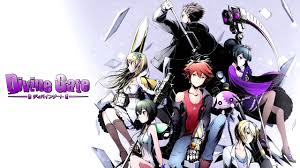 So I really liked the concept and art. The OP en ED are also made very well. But the thing is that there are too many main characters. It’s good when you can get that done, but it sort of failed here. I felt like watching, there only a few days passed. I liked the powers and the ideas of gods, heaven, hell and earth, but it lacked…. how do you call it? Depth I guess? My favourite characters were Aoto, because he’s cool and Loki, because puzzling like that is really something I like about characters. That doesn’t happen often in the anime I watch, so this was nice to see. I saw that it from a game, but I don’t really think I’ve ever heard of it (probably because I’m not Japanese or I’m just not into those kinds of games and don’t get them recommended). The animation was also very nice, but the whole story was in the end incomplete. Whether they wanted us to guess or the plot was just crap, I was thinking about some quotes. I’ll give this a 7/10. I really liked the art, the story was crap, concept was good, character development didn’t really exist. Though I liked that they put myths in it or things like Santa Claus. And of course OP and ED amazing. Hitorie is good. Really good. If you like Japanese music and don’t mind rock, give it a try. Other musician, I don’t know.

Well that was it for this week. Now that I think about it, I began watching anime in summer 2014 or 2015. It’s already been 3-4 years huh? I still feel like a noob though. Oh and previous weekend I reached 50 pages with my story!!! Wooo!!! Okay, yeah I’m done.

See you next week.