First I want to say, thank you author for making this manga and I hope you rest in peace. Fujiwara, Cocoa died: March 31, 2015 (aged 31). So young and yet died so early. Okay, so I actually saw the anime first so I was reading through it very fast. Later I had to read the manga at a slow pace again, because I didn’t understand the situation after the anime. So yay, I read it twice in a row. Anyways, let’s go to the story. 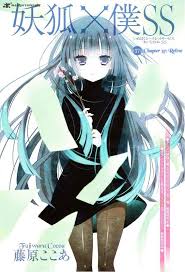 The Shirakiin house’s daughter, Shirakiin Ririchiyo, who has a complex about being unable to live independently and unprotected, feels the need to move out and live on her own under the condition of residing in the mansion named “Ayakashi Kan.” In this mansion, only those who have cleared a very strict examination could reside in it, and for each resident, they are accompanied with one agent of the Secret Service (S.S.). Although Ririchiyo has rejected the company of the S.S., while residing in the mansion she finds out that the agent dedicated to protecting her is actually the Fox Spirit whom she previously rescued.

So, wow, one thing I can say about is it is very dramatic. It’s not dramatic in a bad way. LIke those cliché scenes in shoujo mangas. Some really cried about the story (I can’t remember if I cried, probably not). The art was very nice and the characters were all unique. It was a super good story that earns its reputation and fame. I will give this an 8,5/10, because I jsut liked it. The only thing that disturbs me is that Soushi is like a pedophile, but hey, some people liked how that was going.

So I made this like the night before and it isn’t the best quality. Sorry, my school started again and I’m trying to make summaries on my own….. I’m just a bit uhmm…………..procastinating. (^u^’). Anyways, this was it for this week.