This anime was released this year (2017) and was adapted from the manga “Alice to Zouroku”. The OP and ED are very nice. The OP is “Wonder Drive (ワンダードライブ)” by ORESAMA and the ED is “Chant (kotringo edition)” by toi toy toi. I actually never skipped the opening or ending, because I liked it so much. The voice actor of Sana, hitomi Ohwada, has also done the voice of Takatori Madoka from Shounen Maid. I made a review of that one before (link). Well, onto the review! 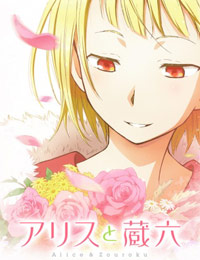 The story is about a girl named Sana who has a special power that only girls get “Alice’s dream”. When you get that power, they have the power they wanted. Sometimes that’s good, other times it isn’t. Sana has the power create and destroy anything it wants to in her mind. When she escapes the lab where she’s being used and experimented on, she meets Zorouku in a convenience store. With the friends and family she makes bonds with, she slowly gets to understand the world and have fun. And Zouroku and Sana get unbroken bond. 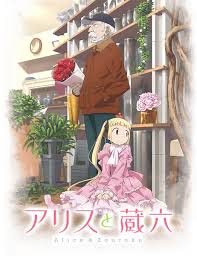 I liked this one. It wasn’t full of adventure and it was soothing. The bright colors and story made it a soft story. There were a few action fragments, but not many. There wasn’t really a big story, but it had a bit of a slice of life effect on it, so that wouldn’t matter. Almost all of the characters were smiling or just neutral. I don’t think it was the best one I’ve ever seen, but it was enjoyable. I would give it a 6,5/10, because the art was nice, but there wasn’t really a VERY original story. The concept was, but it didn’t leave me a very big impression on me. I mean, the original part is that an elder is a main character and about the powers, but the rest was actually not really that original. I would recommend it if you like to take your mind off something and just watch this little adventure taking place.

This was the review for this week. Hope you have a nice day and