This one came out on the site I follow a few weeks ago and I waited for the subtitles and there it was. So I was really excited for this one to see, because I saw many previews of it and it interested me. So here’s the review.

So it’s about a boy named Shouya Ishida and a girl called Shouko Nishimiya. In primary 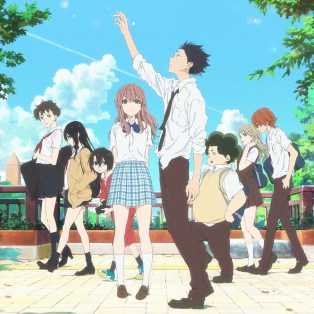 school they were classmates. Shouya was bullying Shouko, because he was a little brat at the time and never thought of the concequences. Shouko endured it all and still tried to be friends, but one day he went overboard and she transferred schools. Then Shouya was blamed in the class and they said it was all his fault, but the whole class participated or laughed about it. Since then Shouya couldn’t look people in the eye anymore, because of the guilt and became a loner. Everytime he looks someone in the eye he would get sick. And then on a fatefull day he meets Shouko again. Will Shouya find the redemption in himself.

So it’s originally a manga, but I only watched the movie and read the first chapters of the

manga. It didn’t interest me at the time so I stopped reading. Then it came back and I was interested so I watched it. I liked the story because there’s the concept of someone that’s deaf. I’ve not seen that many stories with that problem, so it’s original. I liked the story and I cried at the end, but on second thought. It’s a bit rushy at the end and that’s what I was a bit dissapointed over. They also had much with suicide and the consequences were a bit too unrealistic. For an anime it’s good. So I will give this a 7,5/10. It’s good, but it isn’t what I call the best one. But it’s good. I recommend it for people who like the concepts: bullying and suicide. I’m interested in both of them, but that’s because I want to know how people can process that kind of stuff.

So this was my review for this week,